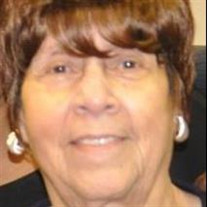 Wilma Eva Clement, of 27 West Caroline Street, Williamston, SC, affectionately known as ''Mama Wilma'', entered into rest on Saturday, December 21st, 2019 at the age of 96 at her home. She was born on October 16th, 1923 to the late Mr. Luther... View Obituary & Service Information

The family of Wilma Clement created this Life Tributes page to make it easy to share your memories.

Send flowers to the Clement family.