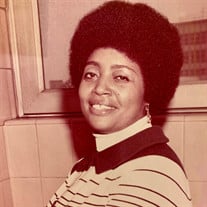 A Funeral Ceremony Celebrating the Life of Mrs. Trayman will be held on Thursday, December 23, 2021 at 1:00 pm at The Unity Mortuary of Anderson with Reverend James Blanding, eulogist. Interment will follow at Oaklawn Memorial Gardens, Anderson, SC. Public viewing will be held on Wednesday from 1:00 pm until 8:00 pm and continuing Thursday from 9:00 am until the time of the service. It was the peaceful afternoon of December 13, 2021, that the Blessed Almighty extended His tender mercies and ushered into eternal rest a beloved wife, mother, grandmother, sister, aunt, cousin, and friend, Willie Mae Latimer-Trayman. She arrived in her family, the second of four children, on May 5, 1935, to the late Willie C. Latimer and the late Corrine (Young) Latimer Mack, in Pendleton, South Carolina. She was the granddaughter of Iola (Coleman) and John Pierce Latimer and Arie (Garrison) and James Young. She attended Westside High School in Anderson, SC, where she excelled academically and played basketball on the girls’ team. Years later, she attended Hunter College in New York City, where she spent the majority of her professional life in psychiatric health as a recreational therapist at Metropolitan Hospital. Willie Mae received the Lord Jesus Christ as her personal savior at an early age at Mt. Able Baptist Church in Pendleton, where she remained a longstanding member. Although not a member of the church choir, she loved to sing Gospel and spiritual hymns, especially when she was troubled, or when she performed household chores. She served the Lord, her church, and her family and friends, tirelessly putting others before her and remaining faithful in all things as long as she was able. Willie Mae’s mother and grandparents instilled in her and her siblings the importance and sanctity of family, the value of education, and the responsibility of service to others. She worked untiringly to uphold and instill these same values in her two children. An avid player of card and board games, she played backgammon and mancala with her children, and delighted in running a Boston against Bid Whist opponents. Later in life, she was an enthusiast of gardening, word puzzles, and solitaire, spending hours at a time on these endeavors. She is remembered by her family and friends as a warm, generous, loving person with a beautiful, feisty, and confident spirit. She never met a stranger and was a blessing to all who knew her. She was equally a pillar of strength, regarded by friends and family as a sounding board for advice and guidance, always offering a helping hand or hug whenever needed. Most especially, Willie Mae became like a “second mama” to many of her nieces, nephews, and cousins, welcoming them into her home whenever they needed a good meal, a good talk, or an amusing story about childhood escapades with her siblings and cousins on Grandpa Young’s farm. Willie Mae’s kind, loving ways, cheerful smile, and feisty manner was a delight to everyone she knew. “What you saw, is what you got” with her. She was authentic. Her legacy is forever rooted in her authenticity and service to her family, neighbors, and friendship. Willie Mae was preceded in death by her parents; spouse: John C. Trayman; and three siblings: Arah I. Wright; Benjamin Latimer; and James A. Latimer. She leaves to mourn and cherish her memory: daughter, Elizabeth A. Latimer; son, Johnnie J. Trayman; stepsister, Lola Mae Philips; two sisters-in-law: Pollie Latimer and Sylvia Latimer; aunt, Ellen Sherard, matriarch of the Young Family; five granddaughters: Angelique Fournier, Friday Frazier, Jonique Trayman, Halima Sow, and Ramata Sow; and a host of nieces, nephews, cousins, and friends. — Willie Mae was loved by all and will be greatly missed by many — The family is at their perspective homes.

A Funeral Ceremony Celebrating the Life of Mrs. Trayman will be held on Thursday, December 23, 2021 at 1:00 pm at The Unity Mortuary of Anderson with Reverend James Blanding, eulogist. Interment will follow at Oaklawn Memorial Gardens, Anderson,... View Obituary & Service Information

The family of Willie Mae Trayman created this Life Tributes page to make it easy to share your memories.

A Funeral Ceremony Celebrating the Life of Mrs. Trayman will...

Send flowers to the Trayman family.