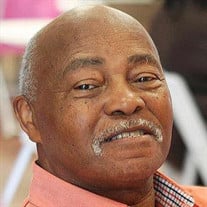 In profound sorrow we announce the passing of Willie ''W.T.'' Thomas Gambrell. He was born on August 25, 1944 to the late Furman and Virgie Lee Gambrell. He entered into rest on January 18th, 2020, he was 75 years of age. He resided at 1615... View Obituary & Service Information

The family of Willie T. Gambrell created this Life Tributes page to make it easy to share your memories.

Send flowers to the Gambrell family.