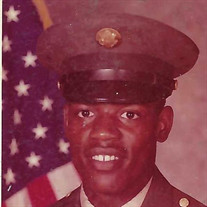 William Kenneth Ware, affectionately known as “Kenny”, age 62, of Anderson, SC, gained his wings and went to be with the Lord on February 22, 2022. Born August 30, 1959 in Anderson, SC to the late David Ware and Annie Mixon. Kenny graduated from Westside High School where he then went to serve in the military. Years later he became a longtime employee of Bosch where he enjoyed singing and bringing cheer to the workplace. Kenny was a true believer of God and was very passionate about spreading his word. He never hesitated to help someone and he always tried to have a positive impact on anyone he crossed paths with. He was a loving husband and father that always had a smile on his face and good intentions in his heart. He leaves to cherish his memories his wife, Beverly Ware; son, Douglas Calhoun; daughter, Kevona Ware; and mother-in-law, Clara Burriss all of Anderson, SC; his “Big Mama” Delores Ware of Anderson, SC; his siblings, Andrew (Gloria) McGhee of Orlando, FL, Jerome (Doris) Ware, and Angela Young both of Anderson, SC; his aunts, Betty W. Jackson, Esther Jackson of Anderson, SC, and Olar Forrest of Charleston, SC; and a host of several nieces, nephews, other loving family members, and friends. The family wish to acknowledge with deep appreciation the many expressions of love, concern and kindness shown to them during this time in our lives. Funeral service for Mr. Ware will be held on Saturday, March 5, 2022 at 1:00 pm at Trinity Baptist Church, Anderson, SC with Reverend Robert C. Simmons, Jr., as the eulogist and Reverend Ronnie Williams, as the presider for the ceremony. Interment will be Thursday, March 17, 2022 at 1:00 pm at the M.J. ‘’Dolly’’ Cooper Veterans Cemetery, Anderson, SC. Public viewing will be Friday, March 4, 2022 from 1:00 pm until 8:00 pm at the mortuary. The family will be at their perspective homes.​

The family of William Ware created this Life Tributes page to make it easy to share your memories.

Send flowers to the Ware family.