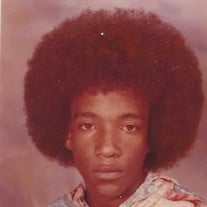 William Charles Spear, the son of the late John Henry and Stella Scott Spear, was born on September 18, 1960. William entered eternal rest on January 29, 2021. He leaves to cherish his memory, his beloved wife, Theresa Plantin of Pendleton, daughter Krystal of Anderson, son Cody of the home, two grandchildren, Jada Robinson and Kaden Robinson, brother-in-law, Joseph Plantin, Jr., of Pendleton, two sisters, Shirley Ann Smith of Anderson, and Edna Jean McGee of Anderson, mother-in-law, Helen Plantin of Anderson, and a host of aunts, uncles, relatives, and friends. He was preceded to death by his son Jason Spear and sister Cheryl Spear. On Thursday, February 18, 2021 at 11:00 am a service will be held to celebrate his life at The Unity Mortuary of Anderson with Dr. James D. Noble, officiating. Public viewing will be Wednesday from 1:00 pm until 8:00 pm. The family is at their respective homes.

The family of William C. Spear created this Life Tributes page to make it easy to share your memories.

William Charles Spear, the son of the late John Henry and Stella...

Send flowers to the Spear family.