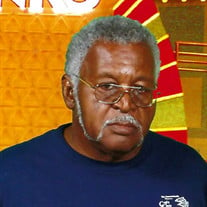 Mr. William H. ‘’Bill’’ Powers. He was born on June 26, 1949 in Anderson, SC and departed this life on January 20, 2021 after a few weeks of illness at AnMed Health Center, Anderson, SC. He was a United States Army Veteran. He is survived by his daughter, Xebilon N.S. Lowden of Orangeburg, SC; sisters, Sarah A. Powers and Daisy (RC) Mitchell both of Greenville, SC; brothers, Douglas M. Powers of Greer, SC and Donald R. (Elaine) Powers of Simpsonville, SC; special friend for many years, Ms. Barbara Lowden of Anderson, SC; two grandchildren; and a host of nieces, nephews, other relatives and friends. He was preceded in death by his parents, John Andrew and Melvina Polite Powers; sister, Ella Jane Johnson; brothers, Franklin DeLano Powers, Fred Powers, Clyde Andrew Powers, Mayo Haskell Powers, and Garvis Powers, Sr. On Tuesday, January 26, 2021 at 11:00 am a graveside service to celebrate his life will be held at Webb Cemetery, Pendleton, SC with Marvin People, officiating. Public viewing will be Monday from 1:00 pm until 8:00 pm. The family is at their respective homes.

The family of William H. Powers created this Life Tributes page to make it easy to share your memories.

Send flowers to the Powers family.