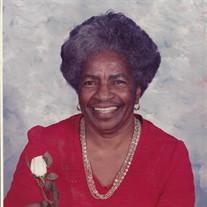 Wilhelmina Watson was born on June 12, 1927 to the late Robert Lee and Marion Watson. On December 31, 2020 God released His angels of mercy and comfort to bring home Wilhelmina’s soul. Angels rejoiced as one of their own was called to rejoin them in Heaven. God offered her a new beginning as things of this world passed away. Now it is time for her eternal life with Jesus Christ. Left with cherished memories of her are loving and devoted daughter, Linda J. Mangle (Billy) of Pelzer, SC; daughter-in-law, Jammie Watson of Greenville, SC; a nephew that was reared in the home, Calvin (Helen) Watson of Williamston, SC; three granddaughters, Letitia Mangle of Pelzer, SC, Detra Watson of Mauldin, SC, and Jamillah Watson of Greenville, SC; three grandsons, Jermaine (Laura) Watson of the home, Revest Mangle, and Ravest Mangle of Pelzer, SC; two great-granddaughters that was raised in the home, Cherish Ruth and Kendall Watson; two sisters, Ruby Crayton of Belton, SC and Ruth Manning of Williamston, SC; one sister-in-law, Allie Watson of Williamston, SC; two brothers-in-law, Levell Robinson of Anderson, SC, and James Sullivan of Brooklyn, NY. Wilhelmina had extended children which include: Tina Terry of Williamston, SC and Diane Patrick of Atlanta, GA, Harvey Terry of Douglasville, GA, Sabrina Blackmon of Atlanta, GA, Sandra Diane Rutledge of Greenville, SC, Tony Hagood of Williamston, SC, Kenyon Matthews of Williamston, SC, Shannon (Candance) of Columbia, SC, Corey Henson of Atlanta, GA, and Karee Rutledge of Greenville, SC; sixteen great-grandchildren, eight great-great-grandchildren; and a host of other relatives and dear friends. In addition to her parents, Wilhelmina was preceded in death by one son, Robert V. Watson; one great-grandson, Dakota Watson; three sisters, Vernee Sheard, Zelma Robinson, and Odessa Sullivan; five brothers, Alvin, Wallace, J.T., Murrell, and Chris Watson; and one extended daughter, Julie Tate. On Saturday, January 9, 2021 at 1:00 pm a graveside service will be held at New Prospect Missionary Baptist Church Cemetery, Williamston, SC. Public viewing will be Friday from 1:00 pm until 8:00 pm and Saturday from 9:00 am until 11:00 am at the Williamston Branch. The service will be streamed live at 1:00 pm through our Facebook live. The family is at 123 Brookview Circle, Pelzer, SC 29669.

Wilhelmina Watson was born on June 12, 1927 to the late Robert Lee and Marion Watson. On December 31, 2020 God released His angels of mercy and comfort to bring home Wilhelmina&#8217;s soul. Angels rejoiced as one of their own was called to... View Obituary & Service Information

The family of Wilhelmina Watson created this Life Tributes page to make it easy to share your memories.

Send flowers to the Watson family.