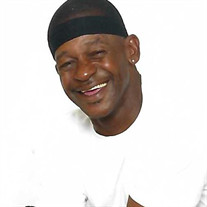 Waddell Dawson, respectfully and affectionately known as ‘’Lil’ Bug’’, age 65, of Anderson, SC, transitioned to his heavenly home on Friday, July 9, 2021 at Dorminy Medical Center in Fitzgearld, GA. Waddell attended McDuffie High School of Anderson, SC, and participated in numerous sports during his life, such as basketball, football, and fishing. He attended Generostee Baptist Church in Starr, SC, where he was a part of the Men’s Brotherhood, the Usher Board, and the Gospel Male Chorus. Waddell was an employee for the City of Anderson Sanitation Department for 25 years and celebrated retirement in 2013. He is survived by his daughter, Shanell Lee McClinton of Greenville, SC; sons, Natarius Cantrell Dawson and Shavonte Quentavious Dawson both of Anderson, SC; three grandchildren; Queshun McClinton, Shacoryia McClinton, and Antonio McClinton; brother, Marshall ‘’Reebok’’ Dawson; sister, Annette Dawson; wife, Sharon (Harrison) Dawson; and a host of other relatives and friends. He was preceded in death by his parents, June Clinkscales and Nellie Mae Dawson; brother, Roscoe Dawson; and two sisters, Linda Faye and Nettie Teresa Dawson. Waddell was a well-known soul who touched the hearts and lives of everyone he encountered. He was known to have a warm- welcoming smile and a spirit of cheer to all who had the pleasure of knowing him. A Celebration of Life Service for Mr. Dawson will be held at 3:00 pm on Tuesday, July 20, 2021 at The Unity Mortuary of Anderson with Minister James Scott, officiating. Public viewing will be Monday from 1:00 pm until 8:00 pm.

The family of Waddell Dawson created this Life Tributes page to make it easy to share your memories.

Send flowers to the Dawson family.