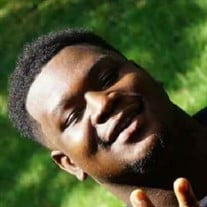 Graveside service for Mr. Kinard will be held on Sunday, September 26, 2021 at 2:00 pm at Westview Cemetery, Anderson, SC with Pastor Nelson Williams, Jr., officiating. Public viewing will be Saturday from 1:00 pm until 8:00 pm and on Sunday from 9:00 am until 12:00 noon. Service will stream-live exclusively through the mortuary facebook page. “For God so loved the world that He gave His only begotten Son, that whoever believes in Him should not perish but have everlasting life.” John 3:16 Shyquan Kendrell Kinard, was affectionately known as “Shy” but had the nickname “Glizzy’’. He was born in Anderson, SC on July 10, 1997. He was employed at Electrolux Plant in Anderson, SC. He was a rapper, starting when he was young. Glizzy possessed a lot of hobbies that he loved in his spare time, like working on his car, but most importantly he loved his family and friends. He always had a big ‘’Kool-Aid’’ smile on his face. In his early years he was a member of Thompson United Methodist Church. He loved his mother, Patrina more than life itself. He loved his grandmother Malinda with unconditional love. Shyquan was preceded in death by his maternal grandfather, David Kinard; great-grandparents, Wilson and Helena Prince and James and Willie Mae Brownlee. He leaves behind to cherish his mother, Patrina Kinard (Everett Phillips); his father, Kenneth (Stacy) Powell; grandmothers, Malinda Kinard and Marshal Powell, grandfather, Herman Paschal; brothers, Daquirus Richardson, Deontae Hull, Anmad Powell, Jakai Powell, and Jaleec Powell; sisters, Keyonta Gaines and Destiny Powell; uncle Chadd (Artrice) Kinard, aunt Monica (Bernard) Durham, cousin Courtney (Quantella) Kinard, a close friend like a brother, Deon Green; and a host of other aunts, uncles, relatives and friends. The family is at their respective homes.

Graveside service for Mr. Kinard will be held on Sunday, September 26, 2021 at 2:00 pm at Westview Cemetery, Anderson, SC with Pastor Nelson Williams, Jr., officiating. Public viewing will be Saturday from 1:00 pm until 8:00 pm and on Sunday... View Obituary & Service Information

The family of Shyquan Kinard created this Life Tributes page to make it easy to share your memories.

Graveside service for Mr. Kinard will be held on Sunday, September...

Send flowers to the Kinard family.