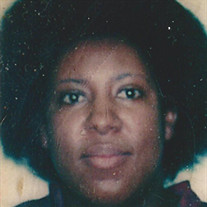 Shirley Jean Jones of 122 Marsh Creek Drive, Anderson,SC, was born in Anderson, SC, February 7, 1961 to the late Harold and Grace Jones. She departed this life on Wednesday, August 19, 2020 at the age of 59. Ms. Jones leaves behind three... View Obituary & Service Information

The family of Shirley Jones created this Life Tributes page to make it easy to share your memories.