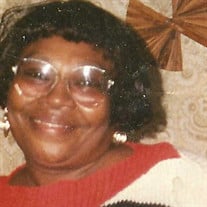 Funeral service for Ms. Heatherly will be held on Sunday, September 5, 2021 at 3:00 pm at The Unity Mortuary of Anderson with Minister Rae Sherman, officiating. Public viewing will be Saturday from 1:00 pm until 8:00 pm and on Sunday from 9:00 am until the time of the service. Shirley Mae Heatherly, affectionately known as ‘’Mama’’, age of 83, of 610 Lanford Street, Anderson, SC passed away on Monday, August 30, 2021 at the AnMed Haelth Medical Center. She was the daughter of the late Magdeline and Albert Greenlee. Shirley ‘’Mama’’ was retired from NHC Nursing Home; doing what she loves and did her best taking care her appointed patience and loved everyone she met. She loved so many and was loved by so many more. She had a smile that lit up the room when she walked in and was full of positive energy. Shirley had deep love for her family and cherished the times they would spend together. She raised seven kids of her own including several of her grandchildren and others. She will forever be loved and in memories. She leaves behind two daughters, Helen Thomas and Judy Johnson both of Anderson, South Carolina; one son, William Johnson of Newberry South Carolina; a special nephew, Lonnie Irby, who she raised in her home and shared a close bond with; three sisters, Cora Anderson and Betty Greenlee both of Anderson South Carolina, and Francene Johnson (Christopher) of Greenville South Carolina; four brothers, Larry Greenlee, Kenneth Greenlee (Gloria), Claude Greenlee, and Don Greenlee (Betty) all of Anderson South Carolina; eleven grandchildren that she raised in her home: Mario Johnson, Ebony Palmer, Ashley Johnson, Jackie Palmer, Sophia Johnson, Tiffany Thompson, Santana Mackey, Demetrius Johnson, Shirley Palmer, Brenda Johnson, and Jenna Johnson all of Anderson South Carolina; a host of other grandchildren and a host of great grandchildren that she also loved dearly. In addition to her parents, she was preceded in death by two brothers, Billy Greenlee and June Greenlee; one daughter, Magdeline Johnson; three sons, Lee Marvin Johnson, Stanley Johnson, and Ricky Johnson; two grandchildren, Sherman Clemons and Dreke Clemons; and one great grandchild, Leighquan Palmer. The family is at 14 Rivanna Drive, Anderson, SC 29625.

Funeral service for Ms. Heatherly will be held on Sunday, September 5, 2021 at 3:00 pm at The Unity Mortuary of Anderson with Minister Rae Sherman, officiating. Public viewing will be Saturday from 1:00 pm until 8:00 pm and on Sunday from 9:00... View Obituary & Service Information

The family of Shirley Heatherly created this Life Tributes page to make it easy to share your memories.

Funeral service for Ms. Heatherly will be held on Sunday, September...

Send flowers to the Heatherly family.