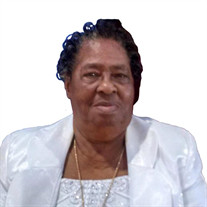 The family of Mrs. Smith invite you to join them as they celebrate her life on Saturday, February 5, 2022 at 12:00 noon at Fairview African Methodist Church, Anderson, SC with Reverend Sterling J. Dowling as the eulogist and Reverend Douglas O. Wood as the presider for the ceremony. Interment will follow at Anderson Memorial Gardens, Anderson, SC. The public is invited to pay their respects to Mrs. Smith on Friday, February 4, 2022 from 1:00 pm until 8:00 pm. The celebration of life will be streamed-live from The Unity Mortuary facebook. Mae Ruth Jenkins Smith was born on December 3, 1927 in Anderson, South Carolina. In the evening of January 26, 2022 at the age of 94, the Lord called her home to an eternal rest from her labors. She was the daughter of the late Mary Beatrice Jenkins Hunter and the late Andy Hunter. She was the widow of Willie Samuel “Doc” Smith. Ruth received her high school diploma on May 26, 1947 from the Anderson County Training High School. While in high school, she played basketball, as a guard. On July 1, 2017 she was honored, by combined graduating classes, as the oldest living graduate of her high school. Ruth retired from Ryobi Technologies (formerly Singer), in Anderson, after many years of service. Following her retirement, she was employed by Cobbs Glen Country Club, in Anderson. She later became certified as a caregiver and cared for several seniors, well into her eighties. Ruth was a life-long member of Fairview African Methodist Episcopal Church, where she served in many capacities. Over the years, she served as a steward, stewardess, class leader, assistant church school teacher, senior choir member, usher, and member of the Lay Organization. She served as the president of the Women’s Missionary Society (WMS) for at least sixteen years. On May 10, 2009 the WMS named the society in her honor, and is now the Ruth Smith Women’s Missionary Society. Ruth also served as a former secretary of the Greenville Area Women’s Missionary Society. Ruth was a very talented and hard-working woman of God. No matter how many hours she worked daily, she still managed to make time for family! She enjoyed a variety of hobbies. She loved to sew and quilt, cook and bake, can vegetables, fruits, jams, and jellies. She liked gardening and loved flowers. She loved gospel music, listening to quartet singing, and singing shaped notes, especially with the Singing Convention. Ruth actively supported her children and grandchildren in their school and community activities, which included PTA, 4-H, the Pendleton High School Booster Club, football games, track meets, band activities and karate tournaments. Ruth leaves to cherish her precious memories and unconditional love five children: Willie Benjamin Smith, of the home, Rev. Beatrice Ophelia Coleman (Rev. Wayman, III), Abbeville, SC, Gwendolyn Arleen Harling, of Anderson, SC, Aleathea Juanetta Dixon (Thornton), of Pendleton, SC, and Pastor John David Smith, of the home; five grandchildren: Corey Smith-Galloway (Christina), Irmo, SC, Wayman Coleman, IV (Jillian), Abbeville, SC, Eddie Harling, Jr and Jacqueline Harling, both of Anderson, SC, and Porschea Harling, Charlotte, NC; six great grandchildren: Noah Smith-Galloway, Selah Smith-Galloway, Isaiah Ford, Jazion Harling, Christian Ford and Wayman Coleman, V; one sister, Ms. Lila Hunter, of Anderson, SC; one brother, George Hunter, Sr., of Anderson, SC; and a host of nieces, nephews, cousins, and friends. In addition to her husband, Ruth was preceded in death by a son, Andy Lavern Smith; four brothers: Frank Jenkins, Charlie Hunter, John Hunter, Sr., and James Hunter; one sister, Margie H. Williams. The family wishes to express their sincere gratitude for all of the prayers and support extended to them, during this time of bereavement. Every act of love and kindness has been greatly appreciated. The family is at the home of Thornton and Juanetta Dixon.

The family of Mrs. Smith invite you to join them as they celebrate her life on Saturday, February 5, 2022 at 12:00 noon at Fairview African Methodist Church, Anderson, SC with Reverend Sterling J. Dowling as the eulogist and Reverend Douglas... View Obituary & Service Information

The family of Ruth Smith created this Life Tributes page to make it easy to share your memories.

The family of Mrs. Smith invite you to join them as they celebrate...

Send flowers to the Smith family.