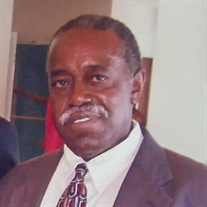 Funeral service for Mr. Traynum will be held on Tuesday, September 21, 2021 at 12:00 noon at The Unity Mortuary of Anderson with Minister Darrell Wood and Dr. Ankoma D. Anderson, officiating. Interment will follow at the M.J.’’Dolly’’ Cooper Veterans Cemetery, Anderson, SC. Public viewing will be Monday from 1:00 pm until 8:00 pm and on Tuesday from 9:00 am until the time of the service. Roy Traynum, Jr., affectionately known as ‘’Sweet June’’ passed peacefully from this life on Saturday, September 11, 2021 at his home surrounded by family. He was born on February 14, 1950 to Sarah Brown Traynum and Roy Traynum, Sr. He joined Welfare Baptist Church at an early age where he enjoyed going to Sunday school and later on became a member of the usher board. Roy, also affectionately known as “Sweet June,” graduated as an honor student from Westside High School in 1968. He was a member of the football team and track team where he held a school record in the 200-meter dash. Westside High School is also the place where he met his high school sweet heart and the love of his life, Dorothy Scott Traynum and she became his wife of 49 years. From this union they had two sons, Rafael and Troy. He was a US Army Veteran; serving from 1969 to 1973 including a tour in Vietnam. His decorations and awards include The National Defense Service Medal, The Vietnam Service Medal, and an Expert Badge M-16. After his service in the Army, he attended Tri-County Technical College. Then he worked in manufacturing until his health declined in 2008. He leaves to cherish fond memories his wife, Dorothy Scott Traynum; two sons, Rafael Traynum (Michelle) and Troy Traynum (Melody); four grandchildren, Danielle Coleman, Naijah Traynum, Jordan Traynum, and Madison Traynum; one great grandson, Nasir Traynum-Abduljabbar; mother, Sarah Brown Traynum; two brothers, Bobby Traynum (Ajrion) and Melvin Traynum (Gloria); one aunt, Della Jones; two uncles, Rev. Rufus Mitchell and Johnell Traynum; and a host of cousins, nieces, nephews, and friends. He was preceded in death by his father, Roy Traynum, Sr., grandparents, Deacon Joe S. Brown and Willie Brown, aunts Margaret Morgan and Addie Mitchell and uncles Joe Brown, Jr. and Samuel Brown. The family is at 113 Drew Court, Belton, SC 29627.

The family of Roy Traynum, Jr. created this Life Tributes page to make it easy to share your memories.

Funeral service for Mr. Traynum will be held on Tuesday, September...

Send flowers to the Traynum, family.