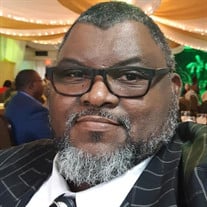 Deacon Robert Earl Lindsay, Jr., affectionately known as ‘’Frog’’ went home to be with the Lord on Tuesday, April 20, 2021 at AnMed Health Center. Robert was a man that met no strangers; he was loved by all, and would light up a room when he entered. Robert was born July 13, 1965 to the late Robert Earl, Sr. and Olivia Robinson Lindsay. He was a graduate of Belton Honea Path High School class of 1984. He was employed with Chiquola Industries for 18 years. At an early age, Robert joined the Liberty Baptist Church where he served as a Deacon, Van Coordinator, Custodian, member of the Jubilee Choir, Sunday School Superintendent Assistant, and Sunday School Teacher. He was a man of God, very humble and dedicated. He would also provide the kids candy every Sunday and they had their very own personal Teddy Bear with it. Robert was a past Worshipful Master of Martin King Lodge # 472 and served as Worthy Patron of Martin King OES #367. He would talk about sports all day long from one sport to the next; Florida State was his number #1 team no matter if they won or not. He is survived by his wife of 21 years, Valerie Scotland Lindsay of the home; one son, Jeremy Posey of Honea Path, SC; one daughter, Olivia Lindsay of the home; one grandson, Skyler James Crane of Honea Path, SC; step-mother, Shirley Lindsay of Honea Path, SC; sister, Cynthia Lindsay of Honea Path, SC; four aunts, Ora Lee Makins of Laurens, SC, Mildred Page and Dorothy Beeks both of Columbia, SC, and Ruth Cunningham of Honea Path, SC; one uncle, Larry Robinson of Greenville, SC; mother-in-law, Shirley Scotland of the home; grandmother, Readie Mae Scotland of Anderson, SC; and one brother-in-law, two sisters-in-law, six nephews, five nieces, and a host of other relatives and friends. In addition to his parents, he was preceded in death by his brother, Gary Robinson; grandparents, J.P. Milton and Tressia Burnside Lindsay, Clifton and Inez Robinson and a nephew, Kyrell Robert Lindsay. A graveside service will be held on Sunday, April 25, 2021 at 2:00 pm at Liberty Baptist Church Cemetery, Honea Path, SC. Public viewing will be Saturday from 1:00 pm until 8:00 pm. The family is at the home.

The family of Robert E. Lindsay, Jr. created this Life Tributes page to make it easy to share your memories.

Send flowers to the Lindsay, family.