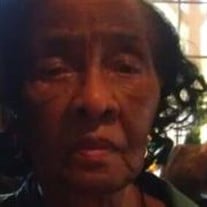 The Unity Mortuary of Anderson announce that family and friends will gather 12noon Saturday, March 9, 2019 to celebrate the life of Mrs. Ophelia Robinson Parker at W.I. Peek & F.W. Jackson Memorial Chapel with interment to follow at Pleasant Grove Baptist Church cemetery 1020 Sexton Ginn Rd. Iva, SC 29655. Family will receive friends one hour prior to service at the chapel. The family is at their respective homes. Family and friends, Our Lord and Saviour called home to rest our beloved Ophelia Robinson Parker at the age of 104 who passed on February 26, 2019. Ophelia (Aunt Fee) was the fourth born of nine children to John Baylus Robinson and Rosa Boseman Robinson. Ophelia will finally join her predeceased husband, Ruben Parker, four beloved sisters, Addie Lee Robinson, Selma Hall, Margaret Overton and Charlie Mae Kearse; three brothers, Ewill Robinson, John B. Robinson and Tom C. Robinson. Ophelia is survived by Edna R. Griffin, whom resides in New Jersey and a host of nieces and nephews. Ophelia was considered the matriarch of the family and most fondly claimed the name “Grandma” or “Auntie Fee” to many. After graduating from Sterling High School in Greenville in 1938, Ophelia was employed by a local shipyard in South Carolina during WWII. Shortly after, she became the first of her family to trailblaze her way north in the late 1940’s in search of work leaving behind her beloved family members. Like most who embarked on the journey to find other opportunities, she performed private nursing duties and factory work. Later Ophelia became employed by Margaret Hayes Hospital in Jersey City, New Jersey. Once she received her cosmetology certification, she worked as a hair stylist at Overbrook Hospital in Cedar Grove New Jersey, where she met her husband Reuben Parker who had also been employed there. Ophelia was known to have had a hearty sense of humor, a beautiful spirit and feisty demeanor. She enjoyed hosting family holiday dinners at her home as everyone embellished upon her rump roast; however, she was certainly known for quite a few specialty dishes. After the passing of her husband 1977, she remained in East Orange, New Jersey for several years before deciding to return to Anderson, SC to reunite with family, old friends and Pleasant Grove Church community in 1999. On Ophelia’s 100th birthday she was recognized by the Mayor of the City of Anderson and Fox News as one Anderson’s very own Centenarians.

The family of Ophelia Robinson Parker created this Life Tributes page to make it easy to share your memories.

Send flowers to the Parker family.