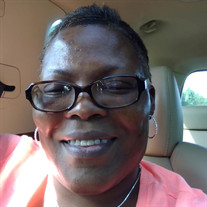 In profound sorrow we announce the passing of Michaela Germaine Cullins Moss, affectionately known as ''Chelle''. She resided at 209 Belhaven Circle, Belton, SC. She was born July 25th, 1968 and entered into rest on Thursday, January 30th,... View Obituary & Service Information

The family of Michaela Moss created this Life Tributes page to make it easy to share your memories.

In profound sorrow we announce the passing of Michaela Germaine...

Send flowers to the Moss family.