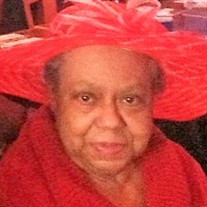 The Unity Mortuary of Anderson announce that family and friends will gather 2:00 p.m. Monday, October 30, 2017 to celebrate the life of Mary F. Wiley at the W.I. Peek & F.W. Jackson Memorial Chapel Anderson with interment to follow at Anderson... View Obituary & Service Information

The family of Mary F. Wiley created this Life Tributes page to make it easy to share your memories.

Send flowers to the Wiley family.