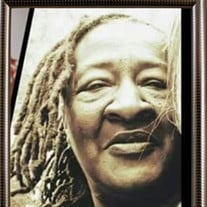 In Loving memories of Ms. Mary Magaline Gaines, age 62, of 139 Lemans Drive, Anderson, South Carolina, departed this life on Thursday, September 8, 2016, at Hospice of the Upstate. She was the daughter of the late Eliza Mae Gaines and Sam Williams. Celebration... View Obituary & Service Information

The family of Mary Gaines created this Life Tributes page to make it easy to share your memories.

Send flowers to the Gaines family.