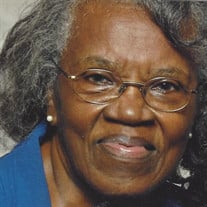 The Unity Mortuary of Anderson announce that family and friends will gather 1:00 p.m. Wednesday, November 7, 2018 to celebrate the life of Mrs. Mary W. Byrd at Mt. Able Baptist Church 130 Mt. Able Church Road Pendleton, SC with interment to follow in the church cemetery. Mary Elizabeth Williams Byrd “Hannah”, of 123 Ellington Road transitioned into eternity on Friday, November 2, 2018. She was born on May 7, 1936 in Anderson County to the late Luellen and Marie Young Williams. She was the third of eleven children and a graduate of Mt. Able Church School. She was married to the late John Heyward Byrd and to this union ten children were born. Hannah was a member of Mount Able Baptist Church where she served faithfully as a member of the Mount Able Gospel choir and the usher’s ministry until her illness. Hannah was employed by Clemson University as a cleaning tech for many years. She also worked as a commercial and residential housekeeper where her job performance was noted as outstanding. In addition to loving and caring for ten children, she was a nanny to many families and their children. She leaves to cherish fond and loving memories; her children, James (Paula) Byrd of Charlotte, NC, Dorothy (Ray) Hunter of Anderson, SC, Larry Byrd of Pendleton, SC, Sharon (Jonathan) Wright of Atlanta, GA, Darryl Byrd of Pendleton, SC, Janet Miller of Anderson, SC, Janice Lee of Pendleton, SC and Lisa Byrd of Anderson, SC. She was a loving Nanny to nineteen grandchildren; five great-grandchildren; sister,Doris (Robert) Walker of Landover, MD; three brothers, James Williams of Hyattsville, MD, Bravell (Dorothy) Williams of Forestville, MD and John Ezell Williams of Fort Washington, MD; one loving aunt, Ellen Sherard of Temple Hills, MD and a host of nieces, nephews other loving relatives and dear friends. She was preceded in death by her parents, two daughters, Melinda B. Mason and Eleanor Ellington; one grandson, Justin Ellington; four sisters and two brothers.

The family of Mary Byrd created this Life Tributes page to make it easy to share your memories.

Send flowers to the Byrd family.