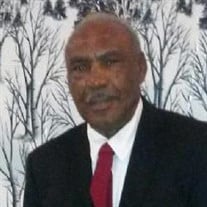 The Funeral Ceremony Celebrating the Life of Mr. Greene will be held on Saturday, November 13, 2021 at 10:00 am at The Unity Mortuary of Anderson with Reverend Rufus Mitchell, presiding and Reverend James Clinkscales, eulogist. Entombment will follow at Oaklawn Memorial Gardens, Anderson, SC. The public visitation will Friday from 1:00 pm until 8:00 pm and on Saturday from 9:00 am until the time of the service. At the request of the family, all attendees please wear mask and observed social distancing. The Funeral Ceremony will stream-live exclusively through the Unity Mortuary’s website. Mr. Marvin D. Greene was born in Walhalla, South Carolina on June 8, 1934. He was the son of the late Frank Greene, Sr. and Adlaide Turner Greene. He departed this life on November 9, 2021. Marvin attended public school in Walhalla and Seneca South Carolina. His college journey began at Friendship Junior College in Rock Hill, South Carolina. He continued his education at Allen University in Columbia, SC where he earned a Bachelor’s Degree in Physical Education and Science. He furthered his education at SC State University where he earned a Master’s Degree in guidance. He was in the United States Army from 1958-1960 where he served in the Second United States Missile Command. Upon a honorable discharge from the military, he was employed by Anderson School District 3 at New Deal High School. There he taught Biology, Physical Education, and served as the head football and basketball Coach. He later joined the faculty at Crescent High School in Iva, SC from where he retired in 1987. During his tenure at Crescent High School, he taught Biology and Physical Education. Marvin served as assistant football coach, junior varsity basketball coach, and later became the head football coach. Years later he served as the Assistant Principal, then Principal of Crescent High School. After retirement he continued working as a counselor for the Alcohol and Drug Abuse Commission. He later became a Hearing Officer for Anderson Districts 4 and 5. He attended and was a member of Royal Baptist Church where he also served as a Deacon. He held offices and served on various boards in the Anderson community. Marvin was a fun, loving, and adventurous person. He was giving, caring, willing to help others, and many sought him for advice. He had a wonderful sense of humor and met no strangers. Marvin leaves to cherish his very fond memories his loving wife, Carol J. Baylor Greene; his daughters Sharon E. Greene-Crite, Gail M. Greene-Nash, and son David M. Greene, II all of Anderson; Grandchildren Michelle, Pierre’ Myia (Damon), Malcolm, Mekaila, Courtney, Devontai, Chance, and Shai; Great Grands Daniel, Maliyah, and Easton; Cousin, close and devoted friend Clyde Bowen (Pat), and a host of nieces, nephews, and friends. He was preceded in death by 5 sisters Frances, Margaret, Sybile, Edna, Mildred, and one brother Frank. His favorite bible verse was John 14:2 In My Father’s house are many mansions; if it were not so, I would have told you. I go to prepare a place for you. The family is at 108 Lone Oak Road, Anderson, SC 29621.

The Funeral Ceremony Celebrating the Life of Mr. Greene will be held on Saturday, November 13, 2021 at 10:00 am at The Unity Mortuary of Anderson with Reverend Rufus Mitchell, presiding and Reverend James Clinkscales, eulogist. Entombment will... View Obituary & Service Information

The family of Marvin Greene, Sr. created this Life Tributes page to make it easy to share your memories.

The Funeral Ceremony Celebrating the Life of Mr. Greene will...

Send flowers to the Greene, family.