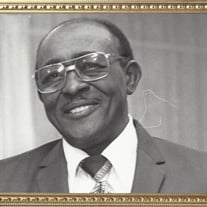 Marcell Cowans, Sr., age 92, of 604 Booker Street, Anderson, South Carolina. He was born June 3, 1924 to the late Claude Thompson and Josephine Norris in Anderson County. He departed this life on Tuesday, August 9, 2016. The day to celebrate... View Obituary & Service Information

The family of Marcell Cowans created this Life Tributes page to make it easy to share your memories.

Send flowers to the Cowans family.