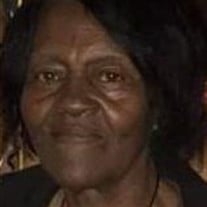 Graveside service for Ms. Hall will be held on Thursday, September 16, 2021 at 1:00 pm at Anderson Memorial Gardens, Anderson, SC with Minister Marie Hunter, officiating. Public viewing will Wednesday until 8:00 pm and on Thursday from 9:00... View Obituary & Service Information

The family of Lula Hall created this Life Tributes page to make it easy to share your memories.

Graveside service for Ms. Hall will be held on Thursday, September...

Send flowers to the Hall family.