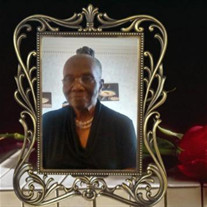 A Service of Love for Mrs. Lila Ruth Allen will begin at 2:00 pm, Friday , May 27, 2016 at King David Baptist Church, 308 Green Pond Road, Anderson, SC 29625. Interment will follow in the church's cemetery. The family will receive friends on... View Obituary & Service Information

The family of Lila R. Allen created this Life Tributes page to make it easy to share your memories.

Send flowers to the Allen family.