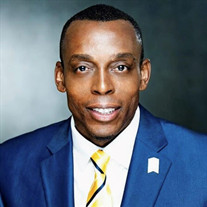 Funeral Ceremony Celebrating the Life of Mr. Miller will be held on Wednesday, December 1, 2021 at 1:00 pm at The Unity Mortuary of Anderson with Pastor YaQuis Shelley, eulogist. Interment will be held on Thursday, December 2, 2021 at 2:00 pm at the M.J. ‘’Dolly’’ Cooper Veterans Cemetery, Anderson, SC. Public visitation will begin on Tuesday from 1:00 pm until 8:00 pm and will continue on Wednesday from 9:00 am until the time of the service. Leonard Miller, Jr. was born in Anderson, South Carolina on July 17, 1966. He was the son of the late Leonard Miller, Sr. and Geneva Anne Miller. He departed this life on November 22, 2021. Leonard attended public school in Anderson at McDuffie High School in South Carolina. He was a renaissance athlete, where he played football, basketball, baseball, and track. He completed some college in Atlanta at DeVry University for the school of business. He was in the United States Marines Corps from 1985-1993. His military career began when he enlisted for the Marine Corps in which he was sent to Paris Island, South Carolina to carry out boot camp. He received several honors while serving where he received Honor Graduate. He was the first fruit for his family to set the foundation to serve the United States Military. He spent time in Camp Pendleton in California in which he was in Reconnaissance as well as communications. This was a special operations capable reconnaissance asset of Marine Air- Ground Task Force that provided division- level ground and amphibious reconnaissance to the Ground Combat Element within the United States Marine Corps. During his tour he spent time in Okinawa Japan, Alaska, and South Korea, and completed combat for Operation Desert Shield Desert Storm in Iraq. He worked for Cintas Corporations in Atlanta, Ga where he was a Sales Customer Representative. He attended and was a vessel of The Hand of the Lord International in Decatur, Ga. Leonard was a simple man while remaining very complex. He was the biggest family man and loved everyone. He didn’t speak much, but when he was passionate about any topic you couldn’t get him to be quiet. He loved God and was always grateful for a new day and he wouldn’t begin his day without giving God praise and made sure everyone in his family group text did the same. Leonard Miller, Jr. leaves his loving wife, Angela Scott Miller; his three adult children, Alexandria Renita Norman (Kevin Norman), Akilah Jhane’ Singleterry (Devin Singleterry), and Levonte Tyrell Miller; his beloved first grandson, Sage Peace Norman; his two brothers, Galen Marcellus Miller and Royce Van Miller I (Alfreda Miller); his nephew and niece, Aisha Jamila Miller, Royce Van Miller II, and Sean Gillison Miller; and a host of uncles, aunts, and cousins. “Thank you, Lord, for the opportunity to give You praise! Be blessed today…” ​​​​​​​ Leonard Miller Jr.

The family of Leonard Miller, Jr. created this Life Tributes page to make it easy to share your memories.

Funeral Ceremony Celebrating the Life of Mr. Miller will be held...

Send flowers to the Miller, family.