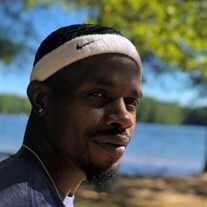 Larendas Lashawn Martin, age 35, of 19 Q Street, Anderson, SC, entered into rest Monday, December 2nd, 2019. He was affectionately known as ''Bucket'' and was born March 1st, 1984 in Anderson, SC. He was a member of Salem Missionary... View Obituary & Service Information

The family of Larendas L. Martin created this Life Tributes page to make it easy to share your memories.

Send flowers to the Martin family.