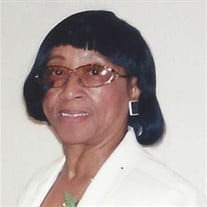 The Unity Mortuary of Anderson announce that family and friends will gather 1:00p.m. Saturday, April 27, 2019 to celebrate the life of Mrs. Johnnie R. Clinkscales at Royal Baptist Church 407 East Hampton Street, Anderson, SC with interment to follow at Westview Cemetery. Family will receive friends one hour prior to service at the church. The family is at the home. Johnnie Ruth Mattison Clinkscales, 80, wife of the late Julius R. Clinkscales of Anderson, South Carolina, departed this life to be with her Heavenly Father on April 23, 2019. Born in Anderson County, she was the daughter of the late Robert and Ruth Lee Mattison and number six of ten children. Johnnie was educated in the South Carolina School System and a graduate of Westside High School Class of 1956. Johnnie was a member of Royal Baptist Church where she served on the Senior Choir. Johnnie was founder of the CGM Singers in 2000 with her husband, Julius; brother, the late Curtis Mattison; cousin, the late Frances Glover; and her grandson, Jaden. The Lord led her son, Ron, to give them their name. They went about singing songs of praise in over one hundred churches and cities in SC, NC and GA. They sang at concerts in Detroit, MI and other events leading souls to Christ. Johnnie retired from Electrolux in 2000 with tens years of dedicated service. Following retirement, she joined Reverend Kelly Simmons, her sister, Arnetha Hood and others in a nursing home ministry. Johnnie is survived by daughter, Devonya Edwina of Atlanta, Georgia; son, Ron LaVell (Adrianne), two precious grandchildren, Jaden and Layla (her pride and joy), all of Anderson, SC; sisters, Arnetha Hood, Rosezella Gilliard and Verlena Ditty, all of Anderson, SC and Evelyn Walston of McLeansville, North Carolina; brother, Tim (Pat) Mattison of Anderson, SC; loving daughter-in-law,Shawn C Williams of Columbia, SC; sisters-in-law Martha Parks (Richard) and Mary Clinkscales (the late Rufus Sr.) and brother-in law, Calvin Bobby Clinkscales (Manuella) all of Anderson, SC; brother-in-law, Lester Clinkscales (Ann) of Indianapolis, IN; and a host of nieces, nephews, cousins and friends. Johnnie was preceded in death by parents, husband, Julius R. Clinkscales; son, Julius Donyae’ Clinkscales; brothers, Robert Mattison, Jr., Curtis Mattison, James Mattison and sister, Dorothy Hood.

The family of Johnnie R Clinkscales created this Life Tributes page to make it easy to share your memories.

Send flowers to the Clinkscales family.