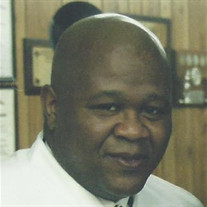 In profound sorrow we announce the passing of John Todd Powers, age 52, of 504 Leon Drive, Anderson, SC on Wednesday evening, February 8th, 2017. The family is at 504 Leon Drive, Anderson, SC 29621. John Todd was born February 24th, 1964 to the late Garvis, Sr. and to the late Jennie Francis Powers in Greenville, SC. John Todd was a graduate of TL Hanna High School class of 81 and was employed by Budweiser Company for many years. In addition of his parents, he was predeceased by a host of family and friends, especially, Mary Davis. John Todd is survived by his siblings : Sonya R. Lee; brother -in -law, Dennis Lee, Kathy L. Brown (Melvin) and Garvis Powers, Jr. (Evette) all of Anderson, SC. Viewing location will be at the Unity Mortuary of Anderson. Viewing date and time will be Saturday, February 11th, 2017 from 12:00 noon until 9:00 p.m. Funeral location will be at the Unity Mortuary, 401 S. Fant Street, Anderson, SC 29624. Funeral date and time will be Sunday, February 12th, 2017 at 2:00 p.m. Interment will follow in the Webb Cemetery , Pendleton, SC.

The family of John T. Powers created this Life Tributes page to make it easy to share your memories.

In profound sorrow we announce the passing of John Todd Powers,...

Send flowers to the Powers family.