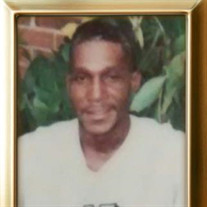 Celebratory Services for Jesse Ronell Cowan will begin at 2:00 pm, Saturday, March 26th, 2016 at the Unity Mortuary of Anderson's Chapel, 401 South Fant Street ,Anderson, SC 29624. He will be laid to rest in the Anderson Memorial Gardens. Family members will be gathering at 116 Derrydown Road, Anderson, SC 29624. Jesse was born on Wednesday, March 3rd, 1965 in Abbeville, SC to the late Argie Lee Gray and Charlie Odell Cowan. Jesse was 51 years of age when he departed this life on Monday, March 21st, 2016. At the time of his death, Jesse resided at 1101 Williamston Road, apt. 2A, Anderson, SC. Jesse attended T L Hanna High School. He enjoyed laughing and having fun with his family and friends. Just the sight of his family members walking through the door would put the biggest smile on his face. Jesse was employed for over 20 years by Andy Anderson Construction Company located in Belton, SC. Jesse is survived by his son, Travis Cowan of Spartanburg, SC; sisters, Merdell Cowan and Sandra Cowan (Ken) both of Anderson, SC and LaShaunda Cowan of Mauldin, SC ; brothers, Donald Cowan (Sarah) of Belton, SC, Johnny Cowan (Maxine) and Wallace Cowan (Jackie) both of Anderson, SC ; a companion of 22 years, Patricia McBride; and a granddaughter ; and a host of aunts, uncles, nieces, nephews, extended family members and friends

The family of Jesse R. Cowan created this Life Tributes page to make it easy to share your memories.

Celebratory Services for Jesse Ronell Cowan will begin at 2:00...

Send flowers to the Cowan family.