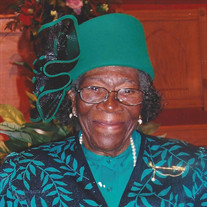 The Unity Mortuary of Anderson announce that family and friends will gather 2:00 p.m. Thursday, June 28, 2018 to celebrate the life of Mrs. Janie Harkness at Generostee Baptist Church 806 Generostee Church Rd. Starr, SC. The family is at 86... View Obituary & Service Information

The family of Janie Harkness created this Life Tributes page to make it easy to share your memories.