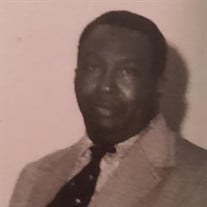 Funeral service for Mr. Tribble will be held on Tuesday, August 24, 2021 at 12:00 noon at The Unity Mortuary of Anderson with Reverend Russell Olgesby, presiding and Reverend Charles Crooks, as the eulogist. Interment will follow in the MJ ‘’Dolly’’ Cooper Veterans Cemetery, Anderson, SC. Public viewing will be Monday from 1:00 pm until 8:00 pm and on Tuesday from 9:00 am until the time of the service. The funeral service will be live stream exclusively through the mortuary’s website. James Andrew Tribble affectionally known as “Tribble” was born February 27, 1918 and he departed this life on Monday, August 16,2021. He was the son of the late Bessie Aiken and James Tribble. In addition to his mother and father, Tribble was preceded in death by his sisters, Lilian Tribble, Emma Arthur, and Josie Reese, and his oldest daughter, Beverly Tribble. Tribble leaves to cherish his fine and golden memories to his daughters, Jacqueline Robinson, Angel Lewis, and Diedre Robinson; grandsons, Isiah Cleveland, Jonah Cleveland, Jaylan Robinson, and Nicholas Simmons; and a host of nieces, nephews, relatives and friends. Tribble worked at the Clemson Dining Hall for many years, where he saw the first black student attend. He was called to service his country in the US Army where he retired after four years. The family is at 531 Watkins Street, Central, SC 29630.

The family of James Tribble created this Life Tributes page to make it easy to share your memories.

Funeral service for Mr. Tribble will be held on Tuesday, August...

Send flowers to the Tribble family.