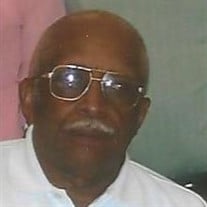 In profound sorrow we announce the passing of J.B. Scott . He was born December 31st, 1930 to the late Bennie and Olar Pratt Scott. He was 89 years of age and resided at 412 Valentine Street, Anderson, SC. He entered into rest on Tuesday,... View Obituary & Service Information

The family of J.B. Scott created this Life Tributes page to make it easy to share your memories.

In profound sorrow we announce the passing of J.B. Scott . He...

Send flowers to the Scott family.