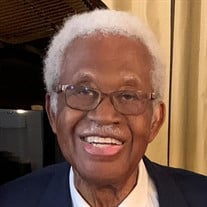 Dr. Harold James Mackey was born on June 22, 1933 in Robertsville, SC. He was the son of the late Iver Mackey, Sr. and Louise Fair Mackey and the last surviving member of his immediate family. After graduating from Wright High School of Jasper County, Dr. Mackey received his Bachelor of Science, Master of Education and Doctorate Degrees from South Carolina State College (University), and his Education Specialist Degree in Administration and Supervision from Clemson University. He taught for a combination of 40 years at Geer Gant High School and Belton-Honea Path High School where he retired. Dr. Mackey was a charter member of the Rho Delta Lambda chapter and a member of Gamma Gamma chapter of Alpha Phi Alpha Fraternity, Incorporated. During his time as an educator, Dr. Mackey and his NFA/FFA students won more than 2700 honors and awards through the NFA/FFA Activities Program. Dr. Mackey was a retired local, state, and nationally recognized educator of 40 years with Anderson School District 2. He is listed in the Congressional Records, Page E 1520, May 15, 1990 and received The “Order of the Palmetto” South Carolina’s highest civilian award on June 9, 1996. He served on the Board of Directors for First Union National Bank of Williamston and served as Chairman of that group. He also served on the State Department of Education Young African American Action Team Committee and State Agricultural Council. Dr. Mackey was elected as the first African American council member and served from 1976 to 2001 on Williamston Town Council. He was Mayor Pro Tempore for the majority of the time. During his time on council, the town saw many improvements including opening and expansion of Town Square Shopping Center, opening of a new American Federal Bank Building, road improvement projects and other economic development. Dr. Mackey worked with council to bring water and sewer improvements to many residents in the town. He was recognized in 1988 by the South Carolina House of Representatives and Senate for his involvement in remodeling of schools and other improvements in the town. During his time on council The Town of Williamston completed construction of a new Williamston police department and jail, which was state of the art at the time, a new fire station, wastewater treatment plant, baseball fields and other improvements to city parks. Dr. Mackey was a devoted Christian who lived his life serving the Lord. He was a member of New Prospect Missionary Baptist Church where he served as a Deacon, Business Manager and Department Superintendent and Sunday School Teacher. He was married to the late Bobbie Mattison Mackey of Williamston, also a longtime teacher in Anderson School District One and they have a daughter, Harriette, also a teacher in Spartanburg County. He leaves to celebrate his life a loving and devoted daughter, Harriette; two nephews raised like his sons, Anthony Bunch (Gena) of Taylors and Greg Jones of Brooklyn, NY; a devoted cousin, Thomasina Anderson; a caring godson, Councilman Tony Hagood of Williamston; three sisters-in-law, Rose Mary Gillespie of Detroit MI, Pearl Jones (Tony) of Manhattan, NY, and Dorothy Ruffin (Freddie) of Brooklyn, NY; one brother-in-law, Billy Mattison (Jean) of Montgomery, AL; nieces, Jeannine Holmes (Tony) of Montgomery, AL, Beverly Mackey of Waterbury, CT, Marna Mackey, Beverly Mackey, Anna Mitchell Parker, Elnora Parker, Loretha Parker, and Edna Jones; nephews, Neil Ruffin (Lisa) of Philadelphia, PA, Keith Mackey (Danielle) of Dover, DE, Calvin Mackey (Danica) of New Haven, CT, Lawton Pickney (Susan) of Norwalk, CT, Charlie Martin, Jr., Ronald Martin, Gregory Martin, Dwayne Bush, Rodney Parker, and Rocky Parker; and a host of nieces, great-nieces, nephews, great-nephews, cousins and friends. Dr. Mackey was preceded in death by his parents, Iver Mackey, Sr. and Louise Fair Mackey; siblings, Maude, John Edward, Herbert, Helen, Charles, Mamie, Pearl, and Vernetta (Dolly); and two nephews, Michael Gillespie of Detroit, MI and Glenn Jones of Queens, NY. A Celebration of Life for Dr. Mackey will be held at 2:00 pm on Friday, June 11, 2021 at New Prospect Missionary Baptist Church Cemetery, Williamston, SC with Pastor Darrin K. Johnson, Sr. and Pastor S.A. Mattison, officiating. Public viewing will be Thursday from 1:00 pm until 8:00 pm at the Williamston branch. The family will receive friends from 5:00 pm until 7:00 pm at the mortuary. The family request that all cards and letters of condolences please be so kind to bring them to the mortuary. The family is at their respective homes.

Dr. Harold James Mackey was born on June 22, 1933 in Robertsville, SC. He was the son of the late Iver Mackey, Sr. and Louise Fair Mackey and the last surviving member of his immediate family. After graduating from Wright High School of Jasper... View Obituary & Service Information

The family of Harold Mackey created this Life Tributes page to make it easy to share your memories.

Send flowers to the Mackey family.