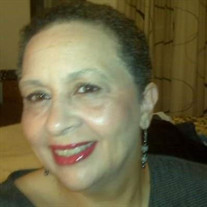 The Unity Mortuary of Anderson announce that family and friends will gather 11:00 a.m. Friday, July 26, 2019 for memorial services to celebrate the life of Mrs. Gloria T. Plotnik at Kings Chapel AME Chapel 135 Vance Street Pendleton, SC. Family will receive friends on Thursday, July 25, 2019 6:00 until 7:00 p.m. at 401 S. Fant Street Anderson, SC. Gloria Thompson Plotnik was born July 28,1955 to Robert H. and Elsie M. Thompson. Gloria was one of five siblings and the youngest of four sisters. As a child, Gloria was often referred to as "Loving Lola" because of her generous affection and radiant smile. She continued to be called Lola throughout her life, and was always eager to supply the family with lots of hugs and kisses if needed. Over the years, Gloria's warmth continued to be a dominant part of her personality. A landmark moment for Gloria occurred when she was selected as one of the first African-American students to integrate the public-school system of Pendleton, South Carolina. With tremendous courage and tenacity, she persevered and became an outstanding student. She cherished her role in ending a dark era of segregation and inequality in public school education. The strength she displayed at such a young age would ultimately serve as a harbinger for her numerous civic, professional, and personal accomplishments. After completing her secondary education in Pendleton, SC, she attended Coker College, from which she earn a Bachelor of Arts degree. Much later, she would earn a master’s degree from South Carolina State University in Rehabilitation Counseling. Upon graduating, Gloria lived in Isle of Palms, SC for several years, where she met her husband of 17 years; Gregory Plotnik, a native of Cloquet, Minnesota. Gloria’s marriage to “Greg” was one of the highlights of her life. Unfortunately, the union ended with Greg’s untimely death following a brief illness. Gloria and Greg lived in several places over the course of their marriage, including Charleston, SC, Albuquerque, NM, and Greenville, SC. Gloria returned to Pendleton with her husband when he became ill. Gloria decided to remain in Pendleton after his death and re-immersed herself into the community. She renewed her membership at Kings Chapel AME Church and worked with several civic organizations including the Anderson County Chapter of the NAACP, where she served as president for many years. Perhaps Gloria’s most fulfilling, and certainly most appreciated, work revolved around the excellent care and attention she provided to her parents during their advanced years. After more than fifteen years of living in Pendleton, she relocated to Columbia, South Carolina and accepted employment as an administrator for the State Vocational Rehabilitation division. While living in Columbia, she became an affiliate member Reid Chapel AME Church. Through the church, she developed close relationships and sang with one of the church's choirs. Most notably, her move to Columbia resulted in a new companionship with a remarkable man, Mel Hart, a local newsman and community activist. This relationship provided a rock of support and love during their time together. Mel and Gloria possessed a very special bond, and he remained by her side until the very end of her life. Throughout her life, Gloria possessed a network of very close friends who she considered family. She was a devoted daughter, loving sister, caring aunt, proud niece, dedicated partner, and admiring member of the Thompson, Hamberg, and Daniels families. She will forever be missed. Her immediate surviving family members are Cecelia Thompson Mitchell (Ron, Candace, Heather, Alea, and Scott), Allison Thompson (Naomi and Daphne), and Robert Thompson II (Shelia, Brittany, and Robert III). She was preceded in death by her loving sister, Dianne (Ursula and Tracey). Gloria's sisters, brother, nieces, nephews, cousins, aunts, uncles, friends, and partner filled her life with love and happiness. She will be missed by all. In lieu of flowers, please send a donation in Gloria’s name to: Alzheimer’s Foundation of America 322 8th Ave 16th Floor NY, NY 10001 www.alzfdn.org (866-232-8484)

The family of Gloria T Plotnik created this Life Tributes page to make it easy to share your memories.

Send flowers to the Plotnik family.