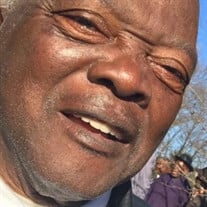 Service for Mr. Tillman will be held on Saturday, October 9, 2021 at 3:30 pm at The Unity Mortuary of Anderson with Pastor James Clark, officiating. Public viewing will be Friday from 1:00 pm until 8:00 pm and on Saturday from 9:00 am until the time of the service. Earnest Tillman, Jr., affectionately known as ‘’Benjr’’ by his family and friends was born December 17, 1944 in Abbeville, SC to the late Earnest Tillman, Sr. and Mattie Mae Teasley Tillman. He departed this life on Monday, September 25, 2021 at AnMed Health Medical in Anderson, SC. Earnest worshipped in various churches in the community. He lived most of his adult life in Abbeville and Simpsonville, SC before living in Anderson, SC. He would often collect and decorate his home with spiritual and Afrocentric figurines. He loved to cook and eat Southern Style cooking. He also loved attending family events and barbecues. Although, he was small in stature. He was a kind soft spoken, loving soul. From his early childhood his older siblings gave him the nickname ‘’Fourcorner’’ whom we all know and love. May God’s angels swiftly carry you into Glory. In addition to his parents, Earnest was preceded in death by his grandfather and grandmother, Jake and Sinnie B. Teasley, of Louisville, SC; sisters, Josephine Collins, Victoria Tillman, Patricia Tillman all of Anderson, SC, and Vera Mae Scott of Fountain Inn, SC; brothers, Marion Tillman and John C. Clinkscales, Sr.; and cousin, Emmac McMillian. In passing, he leaves his brother, Willie Earl Tillman of Anderson, SC; sisters, Amanda Louise Tillman of Fountain Inn, SC, Betty Jo Gary of Hephzibah, GA; nieces, Meka Tillman, Chautequa Miller, Tonya Johnson of Anderson, SC, Mary Scott of Fountain Inn, SC, Trist Williams of Belton, SC, and Alicisa Gary pf Hephzibah, GA; nephews, Antonio Gary of Hephzibah, GA, John C. Clinkscales, Jr. of Anderson, SC. Marion Tillman of Florissant, MO, and Robert Lee Clinkscales of Anderson, SC; and a host of nieces, nephews and cousins. The family is at their respective homes.

Service for Mr. Tillman will be held on Saturday, October 9, 2021 at 3:30 pm at The Unity Mortuary of Anderson with Pastor James Clark, officiating. Public viewing will be Friday from 1:00 pm until 8:00 pm and on Saturday from 9:00 am until... View Obituary & Service Information

The family of Ernest Tillman, Jr. created this Life Tributes page to make it easy to share your memories.

Service for Mr. Tillman will be held on Saturday, October 9,...

Send flowers to the Tillman, family.