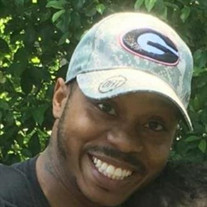 On Monday, June 22, 2020, at the age of 30, Emanuel Cortez Brown, of Jeffersonville, Indiana, formerly of Williamston, SC, departed this life at his home. Mr. Brown served proudly in the Army National Guard. Mr. Brown leaves behind his wife,... View Obituary & Service Information

The family of Emanuel C. Brown created this Life Tributes page to make it easy to share your memories.

Send flowers to the Brown family.