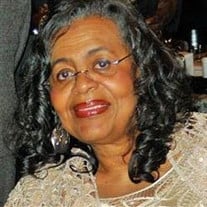 We have been blessed with the life of Eddye Joyce Green for 82 years. She was born on August 6, 1938, in Anderson, SC, to the late Alma Thompson Cowan and James Edward Cowan. She graduated from Westside High School then continued her education at the Freedmen’s Hospital School of Nursing at Howard University in Washington, DC. She worked as a school nurse for Westside High School and later became the first African-American Director of Nursing for AnMed Health, formerly known as Anderson Memorial Hospital. She began employment with the hospital in 1972 as a staff nurse on night shift and while overcoming many obstacles, was promoted to clinical supervisor of nursing, to infection control nurse, to coordinator for in-service education, to Director of Nursing, earning a B.S. in Nursing from the Medical College of Georgia and Master’s Degree in Health Sciences from the Medical University of South Carolina along the way. Retiring in 2000, Eddye Joyce was revered as a brilliant nurse, a caring supervisor, and a strong administrative leader. She played a role in developing the hospital’s Oncology Services department, and worked closely with doctors to establish policies and procedures for the cancer clinic, the oncology research department, and the cancer registry. Also, she served on the boards of medical schools and associations throughout the state, all while raising 2 children, caring for parents and being a military spouse. Since 1986, Eddye Joyce was a devout and beloved member of Delta Sigma Theta Sorority, Inc. and served a term as the President of the Anderson Alumnae Chapter. She served dear St. Paul First Baptist Church faithfully as a Deaconess, member of the Chancel Choir, the Health Services ministry and various committees. She is survived by her daughters, Micheal A. Green (Elaine Morton) of Tyrone, GA and Dr. Valerie S. Green (Roderick Bryant) of Madison, AL; adopted son, Bishop Glenn B. Allen, Sr. (Gintana) of Fayetteville, GA; adopted granddaughter, Ashley Morton Grant (Ronald) of Hampton, GA; devoted niece, Tonya L. Davis of Anderson, SC; devoted nephew, Horace Benjamin Cook, Jr, of Anderson, SC; devoted cousin, Catherine Thompson Nesbitt of Anderson, SC; devoted friend/soror, Carolyn E. Galloway, Esq. of Anderson SC; beloved nieces and nephew, Elaine Underwood Quarles of Anderson SC, Judy Underwood Wilson of Anderson, SC, James Anthony Underwood of Anderson, SC, and Kim Underwood of Anderson, SC; beloved great niece, Taylor T. Jones of Anderson, SC; beloved great-great nieces, Brooklyn, Paris, and Kali Brinson of Anderson, SC; her beloved Sorors of the Anderson Alumnae Chapter of Delta Sigma Theta Sorority, Inc.; and a host of nieces, nephews, cousins, former co-workers, church family and friends. She was preceded in death by the love of her life, her husband, Roosevelt Green; parents, James E. and Alma Thompson Cowan; brother, James Underwood; sister, Fannie Thompson Davidson; and beloved pet, Petey Green. Acknowledgement from the Family A sincere “thank you” from the family to all who have called, texted, sent cards, stopped by, brought food and sent prayers and love. A special thanks to Louise Fant from Snazzy’s Salon and Patrick Thompson from Photographs Unlimited. In lieu of flowers, the family requests that Memorial Gifts be made in honor of Mrs. Green's life to the AnMed Health Foundation, 800 N. Fant St., Anderson, SC 29621, Attn: Eddye Joyce Green Memorial Scholarship. Or donate now: online at www.anmedhealthfoundation.org in the "I would like to dedicate this donation" section. On Thursday, February 4, 2021 at 1:00 pm a service to celebrate her life will be held at Saint Paul First Baptist Church, 322 West Reed Street, Anderson, SC 29621 with Pastor Gene Williams, officiating. Interment will be Tuesday, February 16, 2021 at the M.J. ‘’Dolly’’ Cooper Veterans Cemetery, Anderson, SC. The family is at their respective homes.

We have been blessed with the life of Eddye Joyce Green for 82 years. She was born on August 6, 1938, in Anderson, SC, to the late Alma Thompson Cowan and James Edward Cowan. She graduated from Westside High School then continued her education... View Obituary & Service Information

The family of Eddye Green created this Life Tributes page to make it easy to share your memories.

We have been blessed with the life of Eddye Joyce Green for 82...

Send flowers to the Green family.