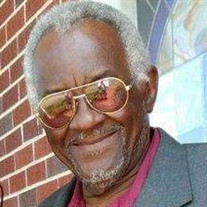 Funeral service for Mr. Harris will be held on Thursday, August 12, 2021 at 12:00 noon at The Unity Mortuary of Anderson with Minister Samuel Burns, presider and Pastor Tiko Thurman, eulogist. Interment will follow at Mt. Able Baptist Church, Pendleton, SC. Public viewing will be Wednesday from 1:00 pm until 8:00 pm and Thursday from 9:00 am until the time of the service. E T Harris, age 78, of Pendleton, SC passed away Friday, August 6, 2021. He was born April 17, 1943 to the late John Henry Harris and Estella Berry Harris. He retired from the textiles industry and he enjoyed spending time with his family and attended Mt. Able Baptist Church in Pendleton, SC. He is survived by his daughters, A. Yvonne Galloway and Vanessa D. Keese both of Anderson, SC, and Alison A. Harris of Pendleton, SC; a son, K. Craig Harris of Pendleton, SC; granddaughters, Tamara L. Galloway of Anderson, SC, Alexis Keese of Piedmont, SC, and Albany Keese of Pendleton, SC; sisters, Willie L. Martin (Paul) of Williamston, SC, Gloria Williams and Jeanette Williams of Pendleton, SC, and Judy Ajaya of Anderson, SC; and a host of nieces and nephews. In addition to his parents, he was preceded in death by his wife, Barbara Ann Williams Harris; brother, John Phillip Harris; a grandson, Kelsey Galloway; and sons-in-law, Rory Keese and Samuel Galloway. The family is at 706 Leon Drive, Anderson, SC 29670.

The family of E.T. Harris created this Life Tributes page to make it easy to share your memories.

Funeral service for Mr. Harris will be held on Thursday, August...

Send flowers to the Harris family.