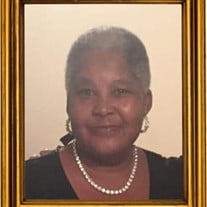 In Loving Memory of Carol Ann Green Bowman, age 64, of 108 South Jefferson Avenue, Anderson, South Carolina. Affectionately known as ''Tulie'' by her family and friends and ''Grandma Tulie'' by her beloved grandchildren .She was born on Wednesday, December 19th, 1951 in Anderson, South Carolina and departed this life on Thursday, July 14th, 2016 in High Point, North Carolina. The day to celebrate her life will be Wednesday, July 20th, 2016 at 2:00 pm at the Saint Paul Baptist Church, 322 West Reed Street , Anderson , SC 29624. Interment will follow in the Anderson Memorial Gardens, South Carolina Highway 24, Anderson, South Carolina. The family is at 116 Webb Street, Anderson, South Carolina 29624. Mrs. Bowman was a life-long resident of Anderson. She was a 1970 graduate of old Westside High School in Anderson, and was retired from Anderson Memorial Hospital and McDonalds Corporation. In her retirement years, she developed a love for traveling, enjoying the mountains and the beach, and even enjoyed a quick getaway from Anderson. Mrs. Bowman enjoyed spending time with her precious grandchildren, attending their concerts, school functions, games, and their church events. Her love for music included singing with the choir and supporting the musical gifts of her grandchildren, nieces and nephews. Mrs. Bowman was member of Saint Paul Baptist Church, where she served as a longtime member of the Gospeliers. She joined the Beulah Baptist Church in 2007 as one of the charter members, where she active in the choir and supported several ministries within the church. Mrs. Carol Ann Green Bowman is survived by her daughters, Tonya Green, Teresa, Monica and Teshyka Bowman all of Anderson and Celestine ''Tina'' Hardy - Cato of Atlanta, Ga.; a sister, Debra Truesdale of Anderson; a brother, Samuel L. Green of Anderson; ten grandchildren, and a host of in-laws, nieces, and nephews, other relatives and friends. Mrs. Bowman was predeceased by her parents, Samuel and Mary Green; husband, Jimmy Bowman; son, Derrick B. Bowman; grandson, Derrius Armstrong; two sisters, Stella Dawson and Mary P. Green.

In Loving Memory of Carol Ann Green Bowman, age 64, of 108 South Jefferson Avenue, Anderson, South Carolina. Affectionately known as ''Tulie'' by her family and friends and ''Grandma Tulie'' by her beloved grandchildren .She was born on... View Obituary & Service Information

The family of Carol Ann Bowman created this Life Tributes page to make it easy to share your memories.

Send flowers to the Bowman family.