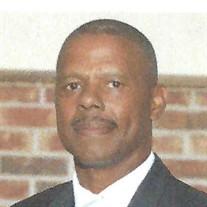 Master Gunnery Sergeant Barry Joe Jenkins was born on August 10, 1952 to the late Percy Cannon, Jr. And Mary Elizabeth (Brown) Jenkins Staggers in Pendleton, SC. On Sunday, December 20, 2020, at the age of 68, Barry quietly transitioned to his eternal rest. Barry served in the United States Marine Corp for 23 years. He was recognized for achieving rank of E9, Master Gunnery Sergeant in record time of 16 years and served as Head Marine Recruiter most of his career. After retiring, Barry continued to serve as a Naval Junior Reserve Officers’ Training Corp (NJROTC) Instructor and Golf Coach at Stephenson High School, Stone Mountain, Georgia. He is survived by his four children: Sennika (Alvin) Todd, of GA; Michelle Black of Greer, SC, Jason E. Jenkins of Charlotte, NC, and Justin (Taylor) Jenkins of Mt. Juliet, TN; two grandsons, Jaden H. Jenkins and Andre’ Todd; two sisters, Rev. Patricia A. Jenkins of Anderson, SC and Maxine Wilkes of Memphis, TN; four brothers, James A. Jenkins of Anderson, SC, Scottie (Sue) Jenkins of Charlotte, NC, Donald (Pat) Jenkins of Pendleton, SC and Ronald ‘’Tray’’ Jenkins of Savannah, GA.; and a host of other relatives, close friends and golf buddies. In addition to his parents, he was preceded in death by his brother, Ricky Jenkins; sister, Linda Jenkins; an aunt, Annie Gambrell; uncle, Honorable Joe Brown; and cousin, Carman Brown. On Sunday, December 27, 2020 at 1:30 pm a service will be held at The Unity Mortuary of Anderson to celebrate his life with Pastor Alvin A. Todd and Pastor Jerome Williams, officiating. Interment will be at M.J. ‘’Dolly’’ Cooper Veterans Cemetery, Anderson, SC. Public viewing will be Saturday from 1:00 pm until 8:00 pm and Sunday from 9:00 am until the time of the service. Sunday’s service will be streamed live from the Unity Mortuary’s Facebook page. Acknowledgement from the Family We, the family, wish to thank each and everyone for your thoughtfulness; every kind word of encouragement, fervent prayers, monetary seed, food, cards and just being there for us during this time of transitioning. May God continue to bless and manifest Himself in your lives. The family is at 1005 Challedon Way, Pendleton, SC 29670.

The family of Barry J. Jenkins created this Life Tributes page to make it easy to share your memories.

Send flowers to the Jenkins family.