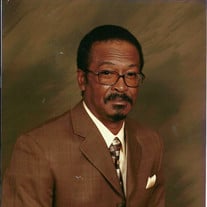 Arthur ‘’Mack’’ Moss was born August 31, 1954 in Anderson, SC to the late Arthur and Frances Moss. He departed this life on Monday, May 10, 2021 surrounded by family and loved ones. At an early age, he joined Welfare Baptist Church. He also graduated from T.L. Hanna High School class of 1973. In high school, he drove a District school bus and worked at Dexter Grocery. He drove a concrete mixer at Metromont, Anderson, Reed Brothers, and Thomas Brothers concrete companies for over 40 years until his retirement as his health began to fail. ‘’Uncle Mack’’ as he was so affectionately known by so many, also enjoyed playing basketball, fishing, traveling and vacationing and grilling for his family and friends. His cheerful attitude and infectious laugh will be missed by everyone. Arthur never complained which showed his strength and courage as he went through life. In addition to his parents, ‘’Mack’’ was preceded in death by his brother, Jerry Crosby; a sister, Sharon Moss; and several aunts. He leaves to cherish his memories his daughter, Amika Thomas; sister, Cassandra Moss; nieces reared in the home, Aretha and Angela Crosby, Jessica (Marion) Williams, as well as Tatyana Moss; nephew, Kendarius Moss; a faithful sister-in-law, Joann Crosby; aunts, Elizabeth and Genell Moss; and a host of cousins, other family members and dear friends. At the request of the family, service and burial for Mr. Moss will be private. The family is at their respective homes.

The family of Arthur M. Moss created this Life Tributes page to make it easy to share your memories.

Send flowers to the Moss family.